Russia, with a total area of around 17 million square kilometers, is the largest country. Russia shares its border with Finland in the north, Kazakhstan Mongolia, China, Azerbaijan and Georgia in the south, Belarus, Ukraine, Poland and the Baltic countries in the west and North Korea to the east. Besides, Japan and the US are in close distance from the eastern coast of Russia. Russia’s close proximity to all these nations makes it a favorable investment destination.

Russia has a very amiable foreign investment policy. In fact, many U.S. firms also opine that the investment returns in Russia is very impressive and one of the highest in their international operations. 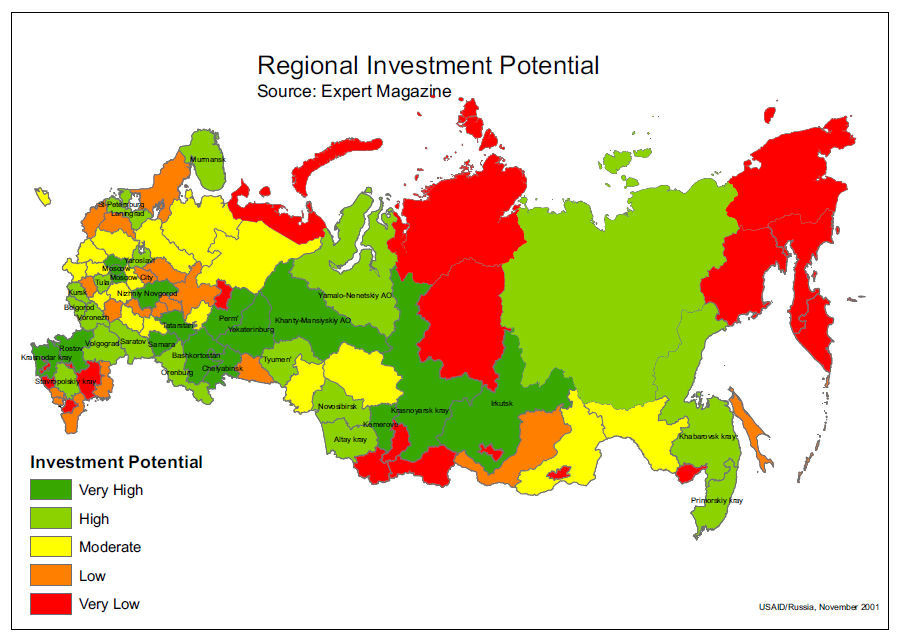 The Russian government understands and acknowledges the importance of foreign investment in Russia’s economic development. The Investment Code introduced in 1991 guarantees the foreign investors equal rights as that offered to the Russian investors. It also disallows the nationalization of foreign investments, except in cases, which are deemed to be in the national interest. The Law on Foreign Investment, introduced in 1999, also asserts this principle of unbiased and impartial national treatment.

In Russia, both domestic legal as well as foreign entities can develop, buy and dispose off their businesses. However, investment in certain sectors, which can affect national security, including energy, communication, natural resources, power, defense – related and transportation may be limited.

Russia also offers favorable investment climate for agribusiness. Even the retail sector in Russia is growing at an impressive rate of 20 percent per year. It is expected to maintain the same growth rate for at least next five years. Russia is also one of the leading automobile manufacturers in the world. The Russian government has reduced the tariff rates. This has encouraged many foreign automobile manufacturers, such as Ford, Toyota, GM, Peugeot, Volkswagen, Nissan, Kia, Renault and Isuzu to set up assembly operations in the country.

The Russian government offers many incentives to foreign investors. It encourages joint ventures of foreign firms with local business entities. Even at the federal level, the Russian government is creating many SEZs (Special Economic Zones), special tourist regions and high-tech parks to encourage foreign investment. Similarly, at the regional level, a host of local governments have been developing programs and laws to attract FDI (Foreign Direct Investment). For this, many local governments have built export zones and technology parks near borders and ports. This is because the local self governments view foreign investment as a bright source of money.

When investing in Russia, the key concerns of the foreign investors include transparency, corporate governance, rule of law, and respect for property rights, such as intellectual property rights. The Russian government has taken appropriate steps to improve structural reforms and ensure clarity in the Russian administration and tax law, improve the corporate governance, make the investment procedures more transparent and make the legal system more reliable.

Thus, Russia can indeed be a safe haven for foreign investors.